for women with Breast Cancer

Anyone who is keen to find out why,  might pay £10 for annual membership of this Pan-European organisation.  Formed to “promote the dissemination and exchange of factual, up-to-date information on breast cancer throughout Europe”.  They put on top level meetings, with addressed by top level speakers from the world of breast cancer treatment.

As a member, I was invited to Milan to take part in ED’s annual Advocacy training (free), and since then have taken part in some fascinating debates on Breast Cancer Treatment.

On edebate got so heated I really thought the opposing speakers would come to blows.  This was fascinating stuff with oppoing sides speaking For and Against Breast Cancer screening.

The NHS should come off its high horse and consult with this pan-European organisation, and it might be shamed in to improving our treatment, and bring our medical care in line with the rest of Europe.

Europa Donna has the expertise

Membership for Patients can introduce us to what is happening in Europe, and it is possible to be invited to take part in their annual Advocacy Cours, held in Milan.

This course brings together members from across Europe, From Uzbekistand to Portugal, and we learn what is going on in other countries.  The lecturers (all in English) are some of the most admired and interesting Oncologits from across Europe – and if I had any criticism it was that one needed more time in between lectures to reflect on what we had just heard – it was mind boggling.

My favoufrite speaker was a lively Italian with a wicked sense of humour!  I would loved to have been one of his patients – if only because he was open-minded and really cared about the long term consequences of our treatment.

The closing date for registration is  2 October 2015

For registration and payment information see the online conference registration form at:
http://events.europadonna.org/

Combiining the conference with shopping and sightseeing?  The hoel is some way out of the centre:  just off the Boulevard Peripherique – (equivalent to our M25 outside London);  hence the low room rate.  It is a very large hotel (609 rooms) and afterwards you may prefer to book in to a hotel nearer the centre, when conference is over.

Most Regional Airports have direct flights to Paris/Charles de Gaulle, then onward travel by taxi or public transport.

If London or south based, then Eurostar is my favourite way to travel, and for anyone with 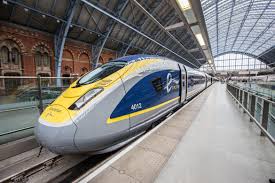 disabilities, this is the most super comfortable transport;  lots of thought has gone into the design.

Fares start at £72 return, but it is well worth upgrading to Standard Premier Class, from £159 return.  For this you get much more leg room, a very comfortable seat, and unlimited water and coffee – plus a basic meal.  Taxi from Gare du Nord station to hotel approx. £21 – £25.    Information:

There are specwebsite,ial conference room rates at the Novotel Paris Est – see info on conference website.  There are 14 dsabled rooms and all areas are easily accessible.

but lots of audience participation

Aren’t you getting tired of Cameron, Lansley and all telling us that European healthcare is better?

You want to tell them SHUT UP

– and DO SOMETHING ABOUT IT.

Well, Europa Donna is an organisation that is quietly getting on with doing something about it.

At their latest meeting in London Prof. Karol Sikora of CancerPartnersUK was in fine form, giving an informative, up-to-date and sometimes provocative talk to their packed meeting.

Welcomed by Dr. Margaret Spittle, Chairman of their UK Forum, many of those in the audience remembered that nearly two years ago, Europa Donna were one of the first organisations to come out in the open with a debate on the latest findings on Breast Cancer Screening.

They gathered together Prof. Laszlo Tabar, a Hungarian based in Sweden, and carrying out rersearch supported by the American Cancer Society, Prof. Michael Baum, the person who was instrumental in setting up the UK’s Breast Screening programme, then – after reviewing new evidence, now questions this.  The meeting was chaired by another professor, Valerie Beral – who almost needed armour for protection.

Because when Tabar and Baum got going, no punches were pulled.  This made for a fascinating debate – but it has taken almost two years for the UK authorities to come up to speed and start asking questions.  see http://after-cancer.com/cancer-news-latest/breast-screening-is-it-for-you-or-me/

So when Europa Donna’s UK chapter invited me to another debate, I did wonder if I should pack some pink boxing gloves!

But all was well controlled, although cancer guru Sikora produced a lot of audience reaction.

With 46 countries in membership, from Finland to Kyrgystan, Europa Donna runs a course for Patient Advocates every year in Milan.  There they gather together patients from all their member countries, to train them how to advocate on behalf of other patients.  The Advocates then go back to their own countries and speak on behalf of fellow patients;  taking part in training, discussing patient’s care and needs with officials, etc.  And guess which country takes little notice of trained advocates?  Britain.

But this may be about to change. Sikora is known to be keen to involve patients, and during the discussions there was comment that if patients were involved, they would be able to point out where money was being wasted.

Another speaker was Baroness Morgan, Chief Executive of Breast Cancer Campaign, talked about ‘Patient and Public Involvement’, a favourite expression of the Dept. Health;  she asked why were these two roles always lumped together by the NHS?

Patients should be taken seriously, and doctors should realise there was no substitute to taking time to talk to patients.   During meetings, if the patient isn’t at the table, how will providers know what is required?

So there was still room for improvement, although she wasn’t sure the much-vaunted offer of choice “is going to benefit all patients”.  Or will it benefit ” patients who shout the loudest?”  Amongst the audience was Professor Lesley Fallowfield, Director of  Cancer Research UK Sussex Psychosocial Oncology Group.  Her work focuses on improving the quality of life for people with cancer, but echoing Baroness Morgan’s question of benefits of choice, she pointed out that one in five patients’ reading level is that of an eleven year old.  She suggested  “we should improve health literacy at school”, and this is where Europa Donna’s Patient Advocates could be usefully employed.

Perhaps, just perhaps, the powers-that-be will think about actually doing something to bring our standards of cancer care up level with European standards – and this meeting left the audience with plenty of points to ponder.

There was no doubt that at the Advocates training course I was invited to attend, there were discussions on what is cost-effective;  as one delegate told me, when asked to imagine what gold-standard mammography services would be, “we only have one machine in my country”.

But involve patients, and not only might services improve in the UK, but the NHS could find sensible ways of saving money.

Occasionally, some of your visitors may see an advertisement here.

Tell me more | Dismiss this message

Breast Screening – is it for you or me?In “Cancer News (latest)”

← Looking after your hands
You’ve got to laugh →