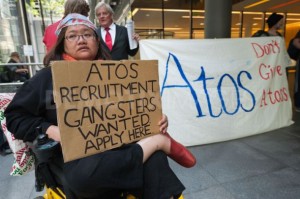 Do a bad job, and you are awarded more work.

Atos has just been awarded the contract to extract patient records from GP’s surgery information.

There has been much in media about the way Atos handled enquiries re FTW.  My experience was upsetting.  I have Neuropathy, as a side effect of cancer drugs, mean I can only shuffle – I look as though I am drunk when walking!  So am lucky enough to have a disability allowance that pays for help with heavy jobs around home.  Am phoned by office to ask questions re my benefit payments.

After name, address etc., we get down to basics.  What disabilities do I have?  Which is oldest?

When did you contract that?

If the question hadn’t been so stupid, I would have laughed.  However, I felt deeply insulted, as for fifty years I had had to live with consequences, work hard to overcome them and live as normal a life as my condition allowed. Once muscles are affected, you don’t get over consequences.

So I terminated conversation, and told questioner I would only answer questions on my medical condition put by someone who was medically qualified, and wouldn’t insult me.  However, am sure that there are many OAPs who would have been scared to take similar action.

Currently, the company is seeking “an early release” from its Fitness for Work contract.

And has been ‘awarded’ the contract to extract patient records from GP surgeries under NHS data sharing scheme:  care.data.

Make a hash of one contract, get your payment and go on to next.  Nice work if you can get it.

Apart from losing our data, the Daily Telegraph says “Patient confidentiality could be undermined by the new medical records database” .  This appaently has been confirmed by the NHS’s own risk analysis.

According to the Daily Mail, the service that at time seems to copy The Mad Hatters’ Tea Party, apparently manages to lose over 2,000 of our patient records a day.  Now it wants us to allow it to give out our personal records to anyone who pays a fee.

Again, the Daily Mai says, it has even sold some of our records on Ebay.  Apparently these were sold by mistake, but how can you sell a product on Ebay without going through a lot of checks and confirmations?  And who got the money they made?  Is it floating in the ether – unclaimed?

Perhaps these records were being sold by the Ward Nurses mentioned as “looking at eBay” by patients’ relatives, instead of attending to patients.

What happened to me

Attending a clinic in Out Patients at my local Foundation Hospital, the Receptionist looked up, “sorry, we’ve lost your notes.  We’ll re-book you”.

But to her astonishment, I just said I would wait, unit they had found them.  I had been inconvenienced attending the clinic;  I had a list of problems, and didn’t want to wait to find out what was wrong.

So I sat down with a pile of magazines and waited from 2 pm until finally, at 4.50, she came over to say they had found my notes, and the doctor saw me.  No apology – I just wondered if this was another way of reducing the waiting lists?

But I called their bluff, and saw the doctor, without re-sheduling an appointment and having another long wait.

When I phone NHS England, who officially are in charge for the programme (and spending out money like water) they deny all knowledge, tell me to go through to Dept. Health – who put me through directly to NHS England.  One hand doesn’t know what other is up to!

MENCAP and RNIB (Blind), etc.  have accused officials running the scheme of unfair treatment of those with disabilities.  And if Mum is showing signs of Dementia, do you want insurance companies refusing to accept her as a bad risk?  Allowing anyone to access this data (if they pay a fee) seems to usher in the 1930s and some rather nasty practices to ‘cleanse’ a population.

The NHS is quoted in the Daily Telegraph as saying “Medical records hold some of our most sensitive information and the threat to people’s orivacy of them being stolen … must not be underestimated”.

Now, if they removed our NHS number from the data being offered, we would have privacy – but this would negate what companies are paying for.

NHS bullies on the war path

The headline in the Daily Mail said:

Hurrah for Dr. Gordon Gancz,  a caring-sounding Oxfordsire GP.  According to the story, his Practice website had put up a succinct and brilliant explanation of the latest initiative to come from the NHS, on his King Edward Surgery, Oxford, website notice board.  This concerns THE NHS’s collection of our medical history, called care.data.

How he managed to collect all the information, I don’t know, as the NHS is being secretive. But there, in clear view, is a link through to the appropriate NHS website – and an explanation of why the Practice was so concerned on behalf of patients.  Having tried, with not much success, to get a clear explanation from the NHS’s Press Office of what was happening (three weeks, five emails and eight phone calls before I received the official literature), I was very interested to read this.

Funnily enough, no-one I know has received this.

Then Feb. 8th’s Daily Mail says cost to us so far is £50 Million – and the NHS cries poverty..

When I phone the Dept. Health’s Press Office (the NHS’s masters and seat of LaLa Lite [Minister Jeremy Hunt], they tell me they don’t know anything about care.data  (they obviously haven’t received a leaflet through their letter box), but “I’ll Google this and give you their Press Office contact”.

An IT industry guru told me he would be very, very concerned if he were aged 25 – 50, a car owner wanting an insurance quote, or medical insurance.  And it worried him what use could be made of one’s medical data.

I have received two emails in last two days offering me 600 Euros (£500) OFF if I register immediately for a conference on sharing NHS data.  As enquirers (drug companies, etc) will be handed our NHS number, our post code and area where we live, it won’t be difficult for companies to get our names very quickly.  If you don’t believe me, how many emails have you received recently that you know are suspect?  And mention things about you that you thought no-on knew? Where did they get your information from?  It is incredibly easy to fbnd this data today, especially if the enquirer has a date of birth and area here someone lives – and giving them one’s NHS number makes it even easier (and why do enquirers need that?)

Dr. Gordon Gancz sounds a caring, sensible GP who bothered to investigate what the NHS were up to – and if the NHS are going to penalise him, I hope all the Undergrads, Graduates and Dons in Oxford rise up in his support.  Now today comes news that other GPs who may follow suit are being threatened with the sack;  others telling their MPs the NHS is using “Big Brother” tactics.

Isn’t it about time the NHS realised it is a health service set up for OUR benefit – and not a money-making service?

You can’t hide any of your private data today.

But the NHS is going to make money from collecting

our private Medical data in one easy-to-access form .

My email pings open with an invitation to a conference in London:

Did you know that NHS, NICE, G-BA, HAS, AETS, EFPIA, Bayer, AstraZeneca, Pfizer, J&J and representatives from many other organisations are expected to gather together in April for the second annual Real World Data conference!

At the event delegates are expect to learn how to create the perfect evidence story and practical steps to creating Risk Sharing Agreements. Your are urged”  find out the most imperative reasons that explain why your competitors have already confirmed attendance”.

As The Guardian says, pharmaceutical and drug companies will be able to access out data.

Early registrants benefit from a €600 discount!
This is obviously a profitable field, and costs range from around £450 –
over £2000.
Makes you think.
And I am not alone
Many expert are worried what the NHS is going to do with all our private data. I wrote about this under https://aftercanceruk.wordpress.com/wp-admin/post.php?post=14625&action=edit
Dr. Max Pemberton in Daily Telegraph of February 10th expressing concern over ‘Big Brother’ threatening tactics towards a caring GP, concerned enough about this data that he has told his patients that he is opting everyone out, until they tell him they want their data submitted.  “in trying to squash  Dr. Gancz’s rebellion, NHS bosses have made him a cause celebrate for those who feel the Government is becoming Big Brother-ish and dismissive of people’s concerns about confidentiality and privacy”.
And Daily Mail of Feb. 8th quotes ‘NHS Data Expert’ Prof. Sir Brian Jarman saying “insurance and drug firms would be able to identify patients ” from this data.  So be prepared for even more junk mail to clutter up our letter boxes.  Their Dr. Brian Scurr also has very factual piece, in which he warns readers not to delay if they wish to opt out.
verite@greenbee.net